Welcome to RVimana (Our Vimana) with Maria & Erich 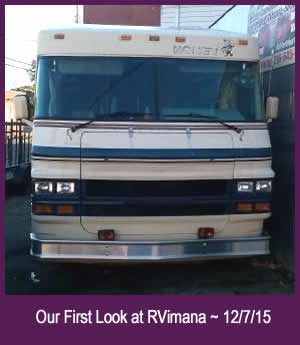 Let’s re-phrase that. The road has just begun. Less than 40 miles away, should have named her ‘Needle’, as this one was that proverbial “needle in a haystack” that we’d been looking four long years for. Our new-to-us travel companion is a 1988 Honey 24′ Class A named RVimana.

A Vimana (in the ancient sanskrit language) is a mythical flying palace that transported its inhabitants to other worlds. RVimana is our new palace on wheels that will take us and many of our friends to countless fascinating places and other destinations while creating special memories.

We’ll keep you updated on where we’ve been and the upgrades we make to Our Vimana, or “the bus”.

Stretched her legs a little farther today – 142 miles to Rossford, Ohio, where EEE will be bowling USBC States April 9th & 10th. Checked out Interstate Lanes and stopped at Bass Pro Shops to spend a gift card EEE got for Christmas on some fishing stuff. Was happy to see a Camping World right next door -I know where we will be staying April 9th!

It was also Kaycee’s first time being left in her travel crate while we made several short stops to eat, visit family and shop. We would highly recommend this kind of “training trip” for your dog – you will be able to see how they react to being left alone and combat any barking or stress issues prior to venturing out on a longer trip.

I found that having her restrained by leash to the cockpit of the RV was more comfortable for her than traveling in her crate. I secured it to my chair. She has @ 5 foot radius to move about in, but will not become a projectile upon sudden stops. She can’t reach under the driver’s feet, but can curl up under mine in the passenger area, or sit on my lap and look out the window, which she seems to enjoy. She just barely reached the bench, where she stretched out and slept for much of the way home.

I heard this on Sunday morning, May 1, in John Bryan State Park in beautiful Ohio. Pretty catchy tune…